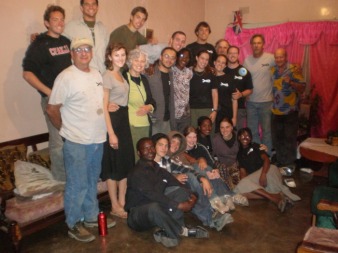 Life Restoration Partners International (LRPI), formerly Stop The Spread (STS), is an interdenominational team from various parts of the United States and Africa.  The seed of this ministry was planted in 2004 in response to the need to Stop The Spread of HIV/AIDS that is sweeping our world. We began focusing our efforts in Zambia where there is high prevalence of HIV/AIDS.  Since 2004, we have continued to add programs, develop leaders, and expand our reach.  Here are some highlights by year.

2005
The groundbreaking year included presentations in over 15 schools, to more than 7,000 high school students, throughout the Copperbelt region of Zambia. The three hour interactive presentations included an overview of the immune system and the biology of HIV, the modes of transmission and contraction, myths and truths about HIV, how to avoid contracting the virus, the stages of HIV in a human body, what to do if you are already infected, stigma, God's plan for sex, and the redemption that is in Christ. This provided a basic education to the students and set a foundation for our ministry to build upon.

2006
We developed a two week long program in two different schools that offered a more in-depth look at the previous year's topics, while adding an emphasis on being tested and how to care for an HIV+ person. The extended time period allowed for lasting relationships to be built. This was the first year that we offered basic counseling to the students.   The team also had daily training sessions with church planting students, teachers-in-training, and persons interested in doing follow-up STS work after our departure.

2007
We spent a week in four high schools and one teachers' training college, continuing in a similar fashion as the year before, but placing an emphasis on the small group setting. This allowed for us to challenge the students to question their actions and draw conclusions for themselves. Periodic meetings were held by local STS clubs throughout the year.

Two week follow-up programs at two schools visited the previous year focused on the topic of trauma, and particularly on dealing with sexual abuse and death.  As with the strictly HIV education program, an emphasis was placed on small group time after completion of the main program. We set a goal to continue to re-visit portions of these topics through out the years.

2008
In addition to the now-standard week or two week education program with the students from various high schools in the Copperbelt Province, the training portion of STS was extended to include the teachers at the schools we visited.

We expanded our area of interest from working through the public schools to also partnering with community leaders who were helping orphans.  The beginnings of our partnership with Enfys began.

2009
A greater emphasis was put on the year-round club activities. It was kicked off by a February trip where we worked
with the Zambian facilitators to set a clear plan, goals, and objectives for the STS Clubs. The summer program was held in July with a focus on teaching smaller, classroom-sized groups in order to facilitate an increase in the amount of interaction with the participants. God continued to bless the youth ministry through contacts in this area.

2010
In 2010 we welcomed our first missionary, John Payne, who lived in Mulfuria, Zambia.  John helped us to establish an executive committee, comprised of Zambian STS Club leaders, to oversee the growing number of clubs.  The STS Clubs continued to take a more active role in setting their own outreach activities and determining what lessons would be most valuable for them. Additionally, through the STS Clubs, greater emphasis was placed on Voluntary Counseling and Testing (VCT).

The outreach to vulnerable children also continued to grow.  The ministry began a tutoring program in Murundu, Zambia, which reached up to 200 children and also included a lunch program.  High school students began serving with the ministry in exchange for school fees through a new program called "Earn It".

2011 – Present
Increased emphasis on serving vulnerable children through two modes - Christian education and family partnerships.  The Zambian tutoring program evolved to become the K to 8th grade Debbie Joy School and lunch program.  Children at the school who are particularly vulnerable are also supported at home through the Family Partners Program.  Motivated Zambian youth from 9th to 12th grade are assisted with school fees in exchange for assisting with tutoring or other needs through the Earn It Program.

LRPI also partners with the Agape in Africa Ministries, which has the vision of helping the local indigenous churches in every country in Africa to plant Bible-believing, Christ-centered churches in every village, town and city on the continent of Africa.